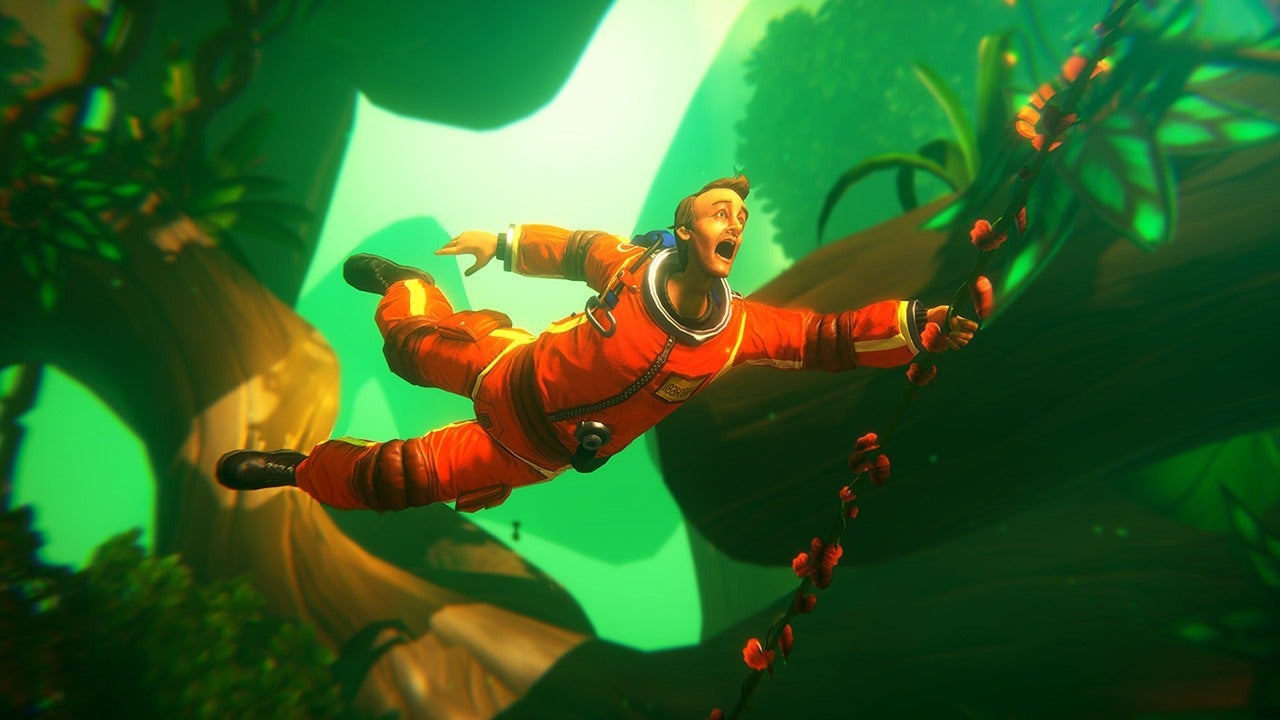 Little Orpheus arrived in 2020 on Apple Arcade and iOS, macOS, and tvOS users were able to experience the adventures of protagonist Ivan Ivanovich, a Soviet scientist who ventures deep down under the surface of the Earth on a mission to find land suitable for civilisation beneath. The mobile version was a simple side-scrolling platformer that could be played with touch controls with horizontal scrolling. Now, the game has finally come out for PC and consoles after months of delay due to the conflict between Russia and Ukraine, and it’s time to check out how Little Orpheus plays on the big screen.

Ivan Ivanovich is the name of a mannequin that was used by the Soviet Union in 1961’s unmanned missions for testing the Vostok spacecraft. Little Orpheus’ Ivan goes on a mission in a rocket as well, but not towards space. Instead, he is sent on a journey to the centre of the Earth, which is believed to be hollowed. Ivan’s mission would be to confirm if the land under is habitable or not. However, the mission goes awry as the Little Orpheus atomic bomb, which was strapped to the rocket used to send them down under, never returns back. Ivan, surprisingly, pops up three years later and tells the tale of his journey.

The Chinese Room, which was also responsible for Everybody’s Gone to the Rapture and Dear Esther, is a visually stunning game. The detailed backgrounds with parallax effects look beautiful when you move Ivan around. The story is narrated by Ivan to the General after he came back to the surface of the Earth. Ivan relates his story to the General, and the banter between the two can be genuinely hilarious at times. The conversation between them continues to take place in the background as he’s telling this seemingly tall tale of escaping monsters and finding lost, ancient civilisations under the planet. The conversation doesn’t happen constantly, thankfully. Instead, it happens at certain points and it adds to the gameplay. Gunnar Cauthery and Paul Herzberg’s performances are very convincing as Russian characters.

The simple gameplay involves moving about, climbing, and interacting with objects every now and then with simple puzzles sometimes mixed in. The controls are extremely simple as well. They only allow you to move horizontally, jump, slide/crouch with the same button and interact with objects. There are also quick-time events in the game, but not frequent enough to come across as annoying.

Ivan would automatically change from walking to running depending on the terrain. He would also do actions like wade through the water, walk slowly while shielding his face from the intense heat after finding the still-active rocket-drill that he used to arrive at the hollow Earth, and so on. Despite the controls being simple, these dynamic movements and animations make Ivan feel more alive as he responds to his environment and surroundings. There are also parts where Ivan disguises himself as an egg seemingly belonging to a dinosaur, by covering himself in the large eggshell and pretending to be an egg to evade an angry Tyrannosaurus Rex that’s after him. Another is when he falls in a snowy area and turns into a snowball. These become refreshing changes in the levels, not that swinging around on vines and ropes got old anyway. Sometimes, less is more, and the folks at The Chinese Room are keenly aware of this.

Big on Graphics, Less on Difficulty

Little Orpheus consists of eight episodes which range from a rainforest, desert, and inside the ruins of a civilisation to name a few. Every level feels different with its own obstacles coming in Ivan’s way to stop him from finding the truth about this hidden world. Speaking of which, the game also features a number of creatures, many of which could attack you. Ranging from dinosaurs, large humanoid aliens that are under control, giant worms spewing venom, and walruses.

Since the levels are so varied, the game does not get boring at all to play through. Sometimes, I was more focused on the stunning backgrounds of the levels instead of the character. The soundtrack by Jim Fowler and Jessica Curry also never misses, always enhancing the experience without going stereotypical even in the jungle, underwater, desert, and space worlds. I played the entire thing in one sitting; with each level taking no more than 40 minutes. The entire game can be finished in just under 4 hours. However, the game does offer some replayability in the form of discovering new orbs in the levels which would unlock behind-the-scenes content and funny outfit that Ivan can wear. The main protagonist is a skinny man that does appear to be an adventurous type. He looks (again) simple, and there’s nothing inspiring about his design. After replaying the episodes, funny outfits can be unlocked for him which can add some replay value, but not much.

The game can be pretty easy to finish. There are times when I got stuck while solving a puzzle or making the right jump at just the right time, but it didn’t take me more than a couple of tries to speed the level anyway. Levels have varying obstacles; upward wind currents are used in one, while another uses low gravity to make leaps to evade said obstacles. Some involve beaming light at dangerous underwater plants that can zap you, or another where you have to be stealthy and avoid being detected by enemies. The main boss of the story does not appear for most of the game and ends up not feeling important or strong enough for the story.

Little Orpheus is more of an interactive story mixed with platformer elements. The game keeps everything really simple and is very short in length, with not much in terms of replay value unless you are a completionist. The low difficulty can also be a turn-off for some. However, the combination of an interesting story, funny characters, and a whimsical, pretty world paired with straightforward gameplay can be a reason for many to give this title a shot.