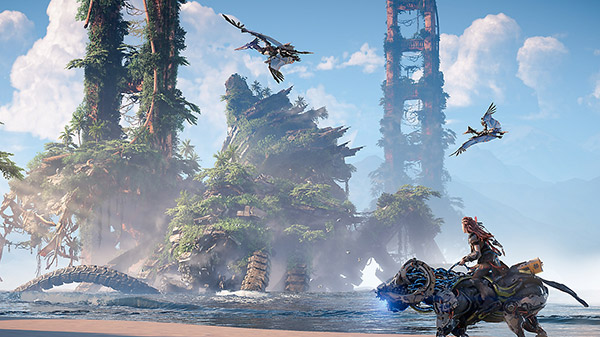 Sony’s business presentation for investors that was released last night contains some interestingly transparent financial projections about its future. These include estimates for how much revenue will increase from PC Games, live service games, and an increased PlayStation presence on mobile devices.

Let’s talk about PC games first. Sony has historically shied away from PC game releases, preferring to keep its exclusive and first-party titles exclusively on PlayStation hardware. That began to change with games like God of War, Horizon Zero Dawn, and Days Gone, which have all been released on PC in the last two years.

Those games brought in $80 million in net sales in 2021, and Sony expects its 2022 PC game revenue to jump 275 percent to $300 million in 2022. That likely means we’ll see more PlayStation games announced sometime this year.

For comparison, only 12 percent of Sony’s PlayStation investments in 2019 were in live service games, with 88 percent being in “traditional” games. In 2022, it’s grown to a 51-49 split, only slightly favoring traditional games.

How many games will be driving that investment? In 2022, Sony apparently intends to have three live services games up and running by the end of the year. One of those games is MLB The Show 22, the other two games have yet to be announced.

By 2025, Sony hopes to have 12 first-party live service games up and running. At least one of those games will likely be Destiny 2, whose developer, Bungie, is being purchased by Sony.

And lastly there’s Sony’s interest in mobile, which comes with fewer numbers but still plenty of business rumbling. Sony apparently intends to both enter into co-development arrangements with top mobile game companies and establish an internal network of game studios working on mobile titles.

Co-development partners would be able to help expand PlayStation franchises to more players and regions, and internal teams would be developing games that might be cross-platform or expand the PlayStation brand to other platforms.

Sony’s push into other platforms comes as the company is trying to get PlayStation 5 consoles into the hands of players. Shortages have continued into 2022, though Sony is hustling to ramp up production to levels “never achieved before.”

Do you see your career as owning a new IT business?