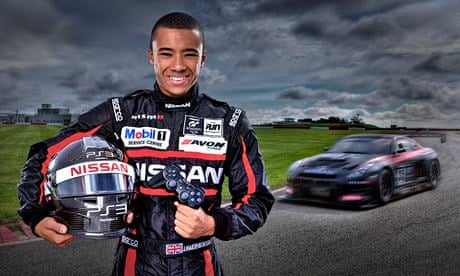 Jann Mardenborough won the Nissan PlayStation GT Academy competition in 2011, earning the chance to take part in professional racing. Backed by Nissan, he has since competed extensively in sports car racing and completed one season in single seaters; he’s finished with a class podium at the Le Mans 24 Hours and as runner-up in the Toyota Racing Series in New Zealand.

As part of the Infiniti Red Bull Racing driver development programme, he will race for Arden International in this year’s GP3 Championship – one of the most important feeder series for Formula One.

I started gaming when I was seven

Playing Gran Turismo on the original PlayStation, really just racing games, I played the odd shooting game now and then but the majority of it was racing, I’ve always had a passion for Gran Turismo and to drive cars I’d probably never, ever, get to drive.

I made it out of MDF wood and bought myself a wheel paddle with some money I saved up, and then I was away. About a year later GT Academy came round, and served me pretty well.

Winning GT Academy was the best moment of my life

I knew that my life was going to change massively. After that, the first time I drove a fast GT car, a fast road car, that was a pretty cool moment – to be released round Silverstone in a 500-horse power Nissan GT-R was pretty crazy for a 19-year-old.

The controls and physics engines in games these days are crazy, they take real-life data from cars and then put them into code so that the way that the car pitches and brakes and the steering input works very well in racing games.

Of course you feel the G-force which you don’t in the game, but you’re so tightly strapped into the seat, that it’s not really an issue.

But it can actually be something that’s fantastic and, although it’s all happened very, very quickly, it’s a amazingly cool situation to find myself in.

In a way, I’m sort of living out my childhood dream, so it’s very fulfilling that gaming is what has allowed me to do that.

It would be the absolute pinnacle for me to reach F1

But I’m concentrating this year on GP3 and will try to develop and improve. The Infiniti Red Bull Racing driver development programme means I can use their simulators to train so that I can arrive at a track I’ve never driven at before and can be on the pace in the first practice session.

A lot of guys have made the jump into the top of the sport from GP3, so it’s nice to know that I’m in the correct championship, and with a great team as well, I’m in a great position to get the ball rolling.

The GP3 season begins in Spain on 9 May, Sky are televising all the races

How to Start a Freelancing Career